Welsh Women Walking fundraise all the way to Everest Base Camp 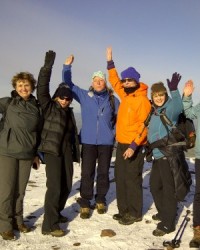 Richard Parks will be leading a special 737 Challenge Everest Base Camp trek in April to raise funds in aid of Marie Curie Cancer Care and joining him on the trek through the Khumbu Valley will be the Welsh Women Walking group.

12 members of the group will join Richard on what is without doubt one of the most famous treks in the world.  They’ll be trekking into the heart of the Nepalese Himalaya, with awe-inspiring views of many of the world's highest and most beautiful mountains and along the way they aim to raise considerable funds for Marie Curie Cancer Care and help Richard in his quest to raise £1m in aid of Marie Curie.

“So far we have raised over £15,000 and are determined to raise as much as we can for Marie Curie and help Richard towards his overall target.  We have had a lot of support already from substantial donations from individuals, to the likes of the Bank of England charity fund.  We hold fundraising walks on the first Sunday of every month and in just two walks we have raised over £800 from them alone.  We also raised funds at the Institute of Directors International Women’s day and there will be plenty more fundraising coming up too.  Two of the team are organising afternoon tea and we are doing everything we can to hit our target of raising £20,000 for Marie Curie Cancer Care”.

Welsh Women Walking have been walking together for three years and are no strangers to raising funds for charity, since climbing Kilimanjaro in 2010 the group have raised over £120,000 for various charities.

As well as putting their efforts in to fundraising for Marie Curie, many of the group are resistance training at Aspire Gym in Canton and then getting out at the weekends on training walks of up to 15 miles.  Jacquie Williams added;  “We are really excited to be joining Richard on his trek.   Not only is it a tough physical challenge for the group, but to be able to share this experience with Richard and utilise his knowledge and expertise will be a real honour”.

Richard Parks stated; “I am thrilled that Welsh Women Walking are joining the 737 Challenge Everest Base Camp trek and am very grateful that they are so committed in helping me raise funds in aid of Marie Curie Cancer Care.  I am excited to share what is an awesome and beautiful trek with both them and all the other people joining me on the 737 Challenge Everest Base Camp Trek”.

He added; “The Himalayas have a special place in my heart and it will be fantastic to go back almost a year since I summited Everest”.