Deep within the frozen Antarctic, Vinson is part of the Ellsworth mountain range and was the last of the Seven Summits to be discovered and climbed.

Antarctica is the world's last great wilderness and remains almost completely undeveloped and unpopulated due to the hostility of its climate. Had the Ellsworth mountain range not contained the highest mountain in the continent and due to their ferocious winds, extreme cold and remoteness they would have only been visited by a handful of intrepid explorers. After flying to Punta Arenas, Chile on the most southernly tip of South America, it is a 6 hour flight in a Hercules C130 plane to Patriot Hills camp in Antarctica. This is a notoriously troublesome part of the journey as the scoured blue ice runway at Patriot Hills is the result of ferocious catabatic side winds which can make landing very challenging. From there it is a further hour in a much smaller twin otter plane on to Vinson base camp where the climb will begin. 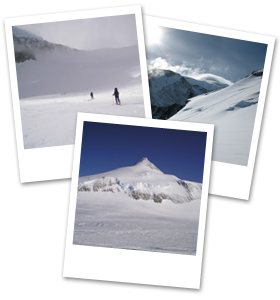