Climate at the North Pole

Richard will be joined by Double Olympic Gold medal rower Steve Williams OBE for this leg, the last degree to The Geographic North Pole.

About The North Pole

They will need to cover the 60 nautical miles / 111km as early as possible after the sun breaks the Arctic Circle. Unlike the South Pole, the North Pole is made up of a fluid jigsaw of ice and open water over the ocean, so there is the added risk of breaking through the ice or having to cross open water. The ground underfoot can be soft ‘porridge-like’ ice or have open water ‘leads’ to negotiate. The opposing scenario are pressure-ridges of up to 7m high, caused when two ice masses collide.

The challenge for Richard and Steve is that conditions dictate they will be battling the last degree to The Geographic North Pole at the same time as Everest Base Camp opens, which means that every day they’re fighting the sea ice to the pole, they’re missing vital acclimatisation on Everest. 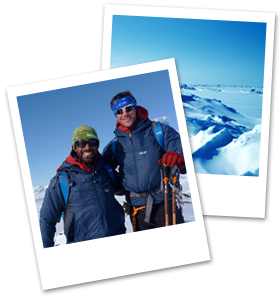