Mt. Everest is the highest mountain on the planet, straddling the border of Tibet and Nepal in the Himalayas and endures as the goal of many mountaineers aiming to experience the roof of the world. It’s this description that lends the summit of Everest being referred to as the world’s 3rd pole.

Most attempts are made during May before the summer monsoon season, when average wind speeds are lower on the mountain. Attempts are sometimes made after the monsoons in September and October, however the additional snow deposited by the monsoons and the less stable weather patterns make climbing extremely difficult during this period.

From Everest base camp, 5,380m/17,70ft the route to the summit can be divided into four separate sections; The Khumbu Ice Fall which is a jumbled morass of ice-blocks, ice towers, and centuries old ice, riven by crevasses, all moving inexorably downwards from the Western Cwm to the Khumbu Valley, below. It's dangerous, as the ice is constantly moving and ice towers can collapse without warning. It is not a place for the faint of heart. The Western Cwm, which is a climb into the hall of the mountain gods. Awesome and gigantic walls tower over you as you move from Camp 1 towards the full expanse of the Cwm above. The Lhotse Face, Everest's most impressive wall. This steep section makes for the most grueling and technically intricate section on the mountain. Gusting winds, snow plumes and the sight of the steep face above greet you from it’s base.

Finally, The Summit Ridge. Negotiating the Balcony, Hilary’s Step just below the summit and the sheer drops from the ridge down the Kangshung Face on one side and the South West Face on the other.

Climbing Everest requires a high level of mountaineering expertise which can only be gained by experience. There are no short cuts. 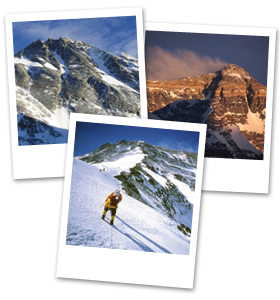