Denali is the local Athabaskan, and widely used name, for Mount McKinley, North America’s highest mountain. Denali is part of the Alaskan range of mountains located some 150 miles north of Anchorage, Alaska.

Its reputation as a highly coveted summit derives from its location near the Arctic Circle and the Pacific Ocean giving it some of the most ferocious weather in the world. As a result of its location, in between Arctic and Aleutian weather systems, the weather on Denali is extremely unpredictable and unlike any other major mountain in the world. Extreme cold is another hallmark of Denali with temperatures routinely falling to -40 degrees Celsius. Denali’s unpredictable and savage weather is an underlying cause of many accidents.

It’s remoteness requires climbers to be responsible for their supplies of food, fuel and equipment for up to a month on the mountain, carrying loads of up to 65 kg, split between an expedition rucksack and a sled.The heavy loads and ferocious weather make Denali one of the toughest mountains in the world. 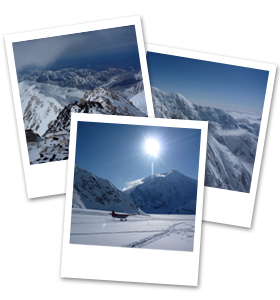