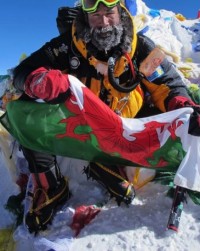 Exactly one year ago today, on May 25th 2011 Richard Parks summited Mount Everest, the highest mountain on earth at 7.42am local time and completed the 7th leg of his record setting 737 Challenge.

A year later, Richard is spending the day preparing to carry the Olympic Torch, writing a book on his epic world first and packing his bags to set off on another expedition to Mount Denali in Alaska.

On the anniversary of summiting Everest, Richard reflects on reaching the top of the world;

“A year has gone by so quickly since that day, so much has happened this year and incredibly I still haven’t had a real opportunity to reflect on Everest or even reflect and savor the 737 Challenge yet, that is the honest truth because I have been fundraising and crazy busy ever since I got back.  When I think back to that time it was a really stressful period for the project.  I arrived at Everest Base Camp 4 weeks behind the other teams on the mountain.  I was tired.  Mentally and physically I was exhausted and there was other added financial pressures on the challenge too”.

“All the signs were showing that there was more chance of me not summiting than summiting and how up against it I was.  I knew that if I was going to summit I would have to push myself mentally and physically to the limit with regards to acclimatisation as I would only have 3 weeks to get ready and all the while, the idea of coming so far and not summiting Everest was catastrophic and really scary to me, especially when I knew I had invested everything I had in to the challenge, from all the hard work the challenge team had put in, everything I had sacrificed financially, to all the preparation and training 2 years before, I was under pressure.  But I knew that the only way through that all was through the middle and balancing that all out with being patient and making the right decisions at the right time was just brutal”.

“Having said that, and for all those challenges that I faced at just even having a summit opportunity, I was rewarded with an incredible experience of Everest.  Summiting so late in the season and being one of the last people to summit in 2011, we were breaking trail on summit day and had the mountain mostly to ourselves, unlike the horror stories that we have all heard about the traffic on Everest.  Reaching the summit was one of the most emotional and spiritual experiences of my life.  Even now, 12 months on, I am still struggling to articulate it and I feel very grateful and privileged to have had this incredible opportunity”.

After summiting Mount Everest, Richard discovered that he had frostbite in his toe, which threw the whole challenge in to jeopardy.  He was then locked in a race against time to recover for the 8th leg of the challenge - Mount Denali and spent days on end using a hyperbaric chamber to speed up his recovery.  Despite many specialists advising him that carrying on with the challenge would put his foot and life at risk, Richard carried on climbing with his painful frostbitten toe.  Even a deadly crevasse fall did not stop him summiting Mount Denali in Alaska and he went on to complete his world first on Mount Elbrus, becoming the first ever person to climb the highest mountain on each of the world's 7 continents & stand on all 3 poles within the calendar same year and within 7 months.

Re-live the tears! – click here to hear Richard calling home from the summit of Mount Everest…warning…it’s emotional!
View the pictures – check out all the images of Richard climbing on the world’s highest mountain.