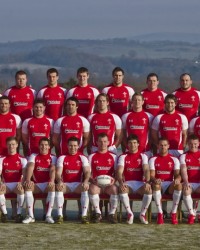 The Welsh rugby squad sent a special message to former player Richard Parks today as he embarks on the final stages to summit Mount Everest and complete another leg in his record-breaking challenge.

Parks is striving to become the first ever person to stand on the world’s 7 highest summits and all 3 poles (The North Pole, The South Pole & Mount Everest) in the same year and raise £1 million pounds in aid of Marie Curie Cancer Care.

So far during his epic 7-month race, “The 737 Challenge” - he has conquered The South Pole, Mount Vinson in Antarctica, Aconcagua, the highest summit in South America, Africa’s Kilimanjaro, Australasia’s highest peak Carstensz Pyramid and The North Pole.

Wales’ head coach Warren Gatland sent a special message on behalf of the Welsh squad to Richard has he embarks on the last push of his ascent of Mount Everest – the 5th summit and 3rd pole on his incredible expedition.  Gatland stated; “Good luck on your Mount Everest climb and for all your hard work so far in raising funds for a fantastic cause”.  He added; “Each and every one of the Wales squad and management are behind you every step of the way and wish you all the very best on what will be a fantastic achievement”.

The message was a fantastic boost to Richard and passed on to him as he arrived at camp 4 - the South Col at a whopping 7,950m/26,083ft.  Parks, who is climbing Everest alongside 2 times Olympic Gold medallist rower Steve Williams, has just 900 more metres to climb to reach the 8,850m/29,036ft peak and is due to reach the summit in the early hours of tomorrow.

However, despite the short distance to travel, there are no guarantees, summit day will require nerves of steel from Parks and Williams, it is the ultimate test in bravery.  They will leave camp 4 and climb up towards the South East Ridge rising to a steady 25/30 degree slope, which continues unrelentingly to the ‘Balcony’ at 8,500m.

After the Balcony the ground ahead rears up into a steep rocky face, a strenuous section of climbing on summit day for Richard and Steve who will be climbing with full oxygen masks.

They will then move on up to the South Summit at 8690m.  The next section is to climb along the very exposed ridge to the famous Hillary Step.  Richard and Steve will have to stay focused on every step, a slip here can be fatal.  The Hillary Step is roughly 40 feet high, and the last obstacle before the summit.  Winds that are likely to accompany their whole climb at a steady 30-40 mph will seem even stronger on the exposed summit ridge.  From the Hillary step there is a moderate angled slope to climb to the summit of Mount Everest, 8,850m/29,036ft high - the roof of the world and the 7th leg of Richard’s world first 737 Challenge.

Richard’s parents, who now face an agonising wait for news from the mountain, were humbled by Wales’ special message, Richard’s mother Lee stated; “We are incredibly proud of what Richard is doing.  To have a special message today from the Welsh squad for Richard is a real boost.  We now pray that Richard and Steve make the summit and get down safely”.