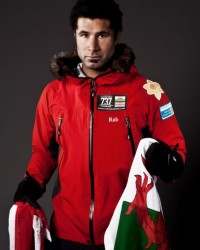 Richard Parks completed the first leg of his world first 737 Challenge this morning, arriving at the South Pole and completing the first of 3 poles he will face during his 7-month race to climb the highest mountain on each of the world’s continents and venture to The South and Geographical North Poles.

Richard will now stay on the South Pole, the southernmost point on the surface of the Earth until January 1st to ensure he reaches all poles within the same calendar year, ensuring his world record is complete at the end of the challenge.

The world's 3 Poles are The South Pole, The Geographic North Pole and the summit of Everest. The top, bottom and roof of the world. Today marked a historical day for Richard and his incredible world first expedition.

CLICK BELOW to listen to an exclusive interview with Richard Parks, recorded just moments after reaching The South Pole on day 16 of his 737 Challenge and after skiing with his team for 60 nautical miles.

Listen to an exclusive interview with Richard Parks, recorded just moments after reaching The South Pole.