Richard Parks: My world first will go on 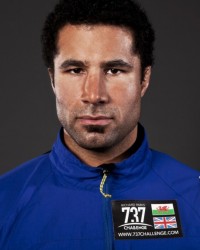 Former Wales rugby international turned mountaineer Richard Parks has vowed he will not give up on his world first 737 Challenge and leaves the UK for Alaska tomorrow to continue the challenge and climb Denali - the local Athabaskan and widely used name for Mount McKinley and North America’s highest mountain.

Parks has been locked in a race against time for the frostbite in his big right toe to recover and has spent the last 16 days since returning from summiting Everest doing everything he can to heal his toe.

Despite two hyperbaric sessions a day and his toe showing massive improvements, it will not make a full recovery for months, yet the brave former Wales flanker is battling on with his world first race to climb the 7 highest summits in the world and reach the north and south poles.

“To have to finish now would be devastating”, said Parks.  “It has been a very difficult decision to make, but one I have made fully informed and after much thought. There are risks involved but I started this world first challenge and I am going to do everything in my power to complete it”.

He added; “I have had the very best advice from consultants, surgeons and altitude medicine specialists, for which I am very grateful for. Everyone has been incredibly supportive. Ultimately though it’s my decision as I am the one who has to live with the consequences.  Once it became obvious to me that my toe would not be fully healed by the latest time that I could leave to safely attempt Denali, my focus has been to try to manage the risks and build towards this decision psychologically.  I’ve not made this decision lightly”.

Parks has already showed phenomenal strength and determination to conquer the South Pole, Antarctica’s Mount Vinson, South America’s Aconcagua, Africa’s Kilimanjaro, Australasia’s Carstensz Pyramid, The North Pole followed by the world’s highest mountain and the 3rd pole of the challenge; Mount Everest.  He achieved these back-to-back feats in just over 5 months.  Richard has just 2 legs of his 737 Challenge remaining; Denali in Alaska and Mount Elbrus in Russia to etch his name into the history books.

He will need to draw on every bit of the mental tenacity he has shown during the heroic months that have passed reaching summits and poles, knowing he may pay the ultimate price; “The risks are high, there is no doubt about that, but if I was risk adverse I wouldn’t have started this!  I see this situation as just an extension of the same risk management associated with safe mountaineering that I’ve shown throughout the challenge.  The best case scenario is that we have good conditions on the mountain and I return with only minimal further damage to my toe, however the worst case scenario is that due to hostile conditions I either refreeze my toe or my toe becomes infected and I develop septicaemia”.

He added; “All these factors are further compounded by climbing back up to extreme altitude, cold temperatures and the remoteness of Denali but I believe in my ability to do this, I wouldn’t have stepped foot on Antarctica back in December if I didn’t.  I spent almost 2 years training and preparing for this, used my life savings, borrowed and sold most of what I own just to get to the bottom of these mountains.  Not to mention the investments of my team and sponsors who took the leap of faith with me and have also given so much to make this a reality. Quite simply I haven’t finished yet”.

Richard has processed the ifs and buts and has been focusing on the aspects that he can control; “Although it’s massively improved, my toe is still partially frostbitten, I can’t change that, I can only focus on what I can control.  I am going to have to be very disciplined and do everything I can to avoid getting an infection.  As always in mountaineering I am going to have to be focused and patient”.

Despite summiting Mount Everest, “the big one”, Denali had always been highlighted as the toughest part of the 737 Challenge.  Richard added; “I have said that it will be the crux of the challenge from day 1.  I was always going to be at my weakest both mentally and physically, making me vulnerable.  It’s a brutal mountain in it’s own right - crevassed, cold, high, remote with very heavy loads, that’s why I climbed it last year as preparation.  It was crucial I had intimate knowledge of the route and the psychology of having been there”.

As a result of its location, in between Arctic and Aleutian weather systems, the weather on Denali is extremely unpredictable and unlike any other major mountain in the world, it’s unique.  Extreme cold is another hallmark of Denali with temperatures routinely falling below -40 degrees Celsius.  Denali’s unpredictable and brutal weather is an underlying cause of many accidents.  Richard added; “I will have to be dialled at all times, the crevasses in the lower mountain are the size of houses and the upper mountain could possibly be extremely cold which will make life challenging trying to protect my toe from re-freezing.  I will be in a lot of pain, I am now as the nerves have begun to regenerate, but I am prepared for this.  The pain is not the issue, years of getting hurt and playing with injuries on the rugby field has prepared me well for that, it’s the unknowns and the things you can’t control which are scarier to me”.

One thing Richard had to be sure about was his technical ability to climb; “I have to be sure of every footing.  There are no half measures climbing mountains like Denali.  Last time I was there, the ‘headwall’ (a section of the route above camp 14) was 300 vertical meters of solid blue ice, making life very difficult for my toes as I had to aggressively kick my foot into the rock hard and spent over 3 hours purchased on just the front points of my crampons.  This is why I have to be sure that my foot is going to be able to hold up to do this, as the consequences of slipping because of a bad foot placement are not worth thinking about.  I have been working closely with my sponsor The Mountain Boot Company - Scarpa and my orthotics supplier and biomechanical sports injury specialists Ace Feet In Motion to put systems in place to ensure my foot performs on the ice”.

Richard will be climbing Denali with friend and experienced Jagged Globe climber Matt Parkes.  “He’s a very strong climber and I couldn’t have a better rope partner for this, and he’s another Parksy! But with an E!!  Both of us have been amped this week as we’ve been packing and preparing. I’m really looking forward to getting back on the mountain”.

It’s going to be Richard’s toughest challenge yet, the ultimate test of nerves and mental resolve but the Brit has the ultimate incentive; “One of my reasons for carrying on is knowing that every step I take I am helping people going through their own struggles”.

Memories of his family member’s struggle with cancer and meeting patients at the Marie Curie hospice in Penarth has focused his mind;  “Yes I am going through a lot, but there are people and their families out there climbing their own mountains everyday as a result of cancer. I see their strength and it inspires me to keep going.”

Finally he added; “I hope that as more people begin to now understand the scale and danger of what I’m trying to achieve, they will be inspired to donate generously and help me raise a huge amount for Marie Curie Cancer Care.  Every step may well be painful, scary, make or break, but it’s not as painful or scary as what others are going through, and if every step I take can help Marie Curie nurses continue to do the brilliant work they do for people and families with cancer and other terminal illnesses, well then it will all be worth it”.