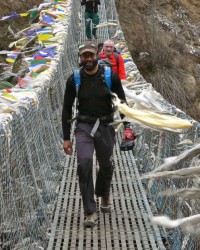 This year will see Richard Parks, working together with Jagged Globe lead two limited and exclusive treks, led by Richard for the very first time.

From Saturday 8th to Monday 17th September 2012 Richard will lead a 10 day Kilimanjaro trek to raise funds in aid of Marie Curie Cancer Care, whilst next month he will be leading a group to Everest Base Camp for 20 Days from Sunday 22nd April to Friday 11th May 2012.

Would you like to set yourself a challenge and climb Mount Kilimanjaro, whist raising funds for an amazing cause?

Experience the beautiful Lemosho Glades route, which provides breathtaking views and gradual acclimitisation as you climb the highest freestanding mountain in the world!

CLICK BELOW TO FIND OUT MORE ABOUT THE KILIMANJARO TREK

Richard stated; “I am really excited about leading the two treks in partnership with Jagged Globe.  I was blown away by Kilimanjaro during my 737 Challenge. It’s such a beautiful mountain, with some of the best sunrises and sunsets I’ve seen.  The Lemosho Glades route is awesome and takes us away from the traffic of the more climbed routes, which I believe does the mountain justice.  Everyone on last years 737 Kilimanjaro climb reached the summit together which made that particular leg of my challenge really special so I hope that people sign up to come this year and am as excited as I am!”

Want to join Richard on one of the most famous treks in the world?

12 places have already been taken for this year’s trek to Everest Base Camp but there are some places still remaining, if you would like to join the trek which takes you into the heart of the Nepalese Himalaya, with awe-inspiring views of many of the world's highest and most beautiful mountains, please book soon.