All change again for Richard and Steve! - New summit schedule 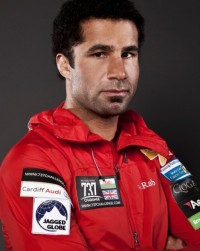 Following further weather updates today and increased wind speeds on Everest over the next few days, Richard and Steve will now remain in camp 2 tomorrow and will not climb to camp 3 until Sunday 22nd.  This means that summit day is projected to be after the 23rd May.

Keep up to date with all the updates day-by-day here at 737challenge.com

We leave Base when it’s pitch black and at it’s coldest.  The Khumbu Icefall is at it’s most stable because when the sun comes up, the ice starts melting and things start dropping off and breaking up – the sun here is so strong and the glare you get form the ice and snow underneath you is absolutely stifling, it’s so uncomfortable to climb in that heat.  The Icefall just saps you of energy, it blows my mind how much it changes every time you climb it.  It takes 4 hours to climb through the Khumbu Icefall up to camp 1, we’ll have a short break of 10-15 mins.

The climb from camp 1 to 2 is a relatively easy climb it’s maybe 2 to 3 hours.  At this point they move on to the Western Cwm, which is part of the same glacier but a more gradual climb.  There are a lot of hazards here – it’s heavily crevassed, the biggest crevasse on the mountain at the moment spans 5 ladders, which is in the Western Cwm between camp 1 and 2.  It’s certainly not safe here but compared to 700 vertical metres of the Khumbu icefall it’s relatively easier.  Camp 2 is half way up the Western Cwm set off to the side on a rocky moraine very similar to base camp but on a much smaller scale and it’s around 6400m.

Richard on the Western Cwm:

The Western Cwm is a snow-covered valley and some days it can be incredibly hot, up to 35c (80-95 degrees Fahrenheit) because the strong sun reflects off the valley basin and because of elevation, it can be really uncomfortably hot if it’s a windless day.  We have to be careful of snow blindness on the mountain, there’s been a few cases already this season.  I’ve already spent quite a few days in just my pants in my tent in the Western Cwm just trying to stay cool and hydrated during my acclimatisation! It’s a little bit of Wales too - The Western Cwm (cwm, pronounced coom) is Welsh for a bowl shaped valley!

Richard and Steve will to climb half-way up the Lhotse Face to camp 3 – 7100m.  The western flank of Lhotse, a peak which is connected to Everest via the South Col is known as the Lhotse Face.  Any climber bound for the South Col on Everest, including Richard and Steve must climb this 1,125m (3,700 ft) wall of glacial blue ice.  This face rises at 40 and 50 degree pitches with the occasional 80 degree bulges.  In camp, depending on how they feel Richard or Steve may sleep with a low flow of oxygen to ensure they get a good night’s rest.

The Lhotse Face – is long and steep!

The Western Cwm comes to a dead end with a seemingly vertical wall - the Lhotse Face.  A two-hour steady ascent out of camp2 then the steep stuff begins in earnest. To start with a 10-metre vertical blue ice wall, which is front-pointing on your toenails.  Thereafter it’s probably only50 degrees but even so the face seems to touch your nose – whatever, you don’t want to slip.  It feels like we’re properly climbing a mountain on the Lohtse Face and all your senses and concentration are on the highest alert – a truly invigorating place to be.

Richard and Steve will climb from Camp 3 to Camp 4 (7,950m) on Everest’s South Col and reach the infamous “Death Zone”.  They leave camp 3 on the Lhoste Face and climb over two rocky sections called the Yellow Band and the Geneva Spur, which interrupt the icy ascent on the upper part of the face.  It is always a very challenging day due to the altitude and terrain and having to climb whilst wearing an oxygen mask.  They will sleep then awake around 8pm and prepare to leave for the summit around 9pm.

Arriving at the South Col felt like landing on the moon.  30-40 mph winds swept the barren, open expanse while Everest’s summit towered 900m above.  Evidence that it has been a hard season lay strewn around.  There was more than a dozen shredded and tattered tents that had been brand new just a few weeks before; their bent and broken poles jutted skywards through ripped and flapping fabric. Abandoned food, gas cans, stoves and ropes lay scattered on the ground.  Lighter articles were picked up on the stronger gusts and lifted, bouncing across the stony surface eastwards towards Tibet.

Richard, Steve and the team will leave camp 4 and head for the summit at night, at 10pm on Monday 23rd weather permitting.  Leaving the South Col they will climb up towards the South East Ridge.  This rises to a steady 25/30 degree slope and continues unrelentingly to the ‘Balcony’ at 8,500m.  In ‘dry’ years this slope is made up of small loose stones. This is not only a tedious and unpleasant surface to climb, but higher parties can knock stones onto those below, creating a significant hazard. Here at the Balcony is usually the first chance of having a rest and something to eat and drink.  They will then move on up to the South Summit at 8690m.

The next section is to climb along the very exposed ridge to the famous Hillary Step.  A slip here will send you all the way down into either Tibet or Nepal.  The Hillary Step is roughly 40 feet high, and the last obstacle before the summit.  Depending on the weather conditions, this Step can be covered in deep snow or exposed rock with little snow.  After this Step it is a moderate angled slope to climb to the summit of Mount Everest - 8,850m/29,036ft high, the roof of the world!

So far this season the slope to the Balcony has been completely covered by snow, which makes progress a little easier and a lot safer.

After the Balcony is a short section of fairly level snow, including anexposed ridge, the ground ahead rears up into a steep rocky face. The rope leads upwards for over 100m before the ground becomes easier.  This is perhaps the most strenuous section of climbing on summit day.  As you look back you can see and hear the crampons of the other climbers scratching on the steep rocks behind you.

You then drop a few metres onto a level section of the summit ridge beyond the South Summit and by the time you change oxygen bottles, the first light of dawn begins to lighten the Eastern horizon.  In the space of a few minutes the sky brightens and you can see the final ridge leading to the summit, 800m ahead and 100m higher.

Winds that have been a constant accompaniment to the climb at a steady 30-40 mph seem to be even stronger on the exposed summit ridge.  You then inch your way along the track in the snow towards the summit.  In places large cornices overhang the west side of the ridge and you have to be careful not to venture too close to the unstable crest of the ridge.  Although most of the route along the summit ridge is on snow at present, there are some sections, or steps, on rock.  The best known of these is the ‘Hillary Step’ which occurs about 25% of the way between the South Summit and Main Summit.  In some seasons this can present a difficult obstacle of steep rock with few easy holds. However this season there has been a lot of snow on the summit ridge and this makes the step easier than ‘normal’.  After this the route continues along easier ground until at last the large accumulation of colourful prayer flags that mark the true summit come into view.

Thank you to Jagged Globe’s team leader David Hamilton for his comments.